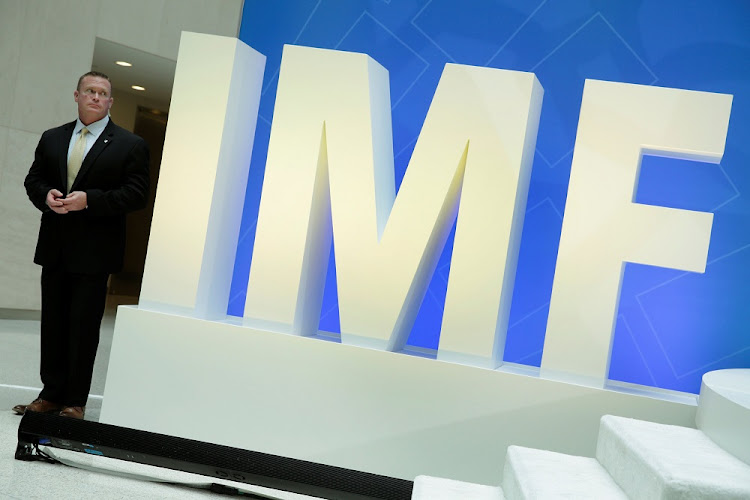 A security official stands in the lobby of the International Monetary Fund headquarters in Washington, the US. Picture: REUTERS/YURI GRIPAS

Nairobi â€" The International Monetary Fund (IMF) raised its assessment of the chance of Kenyaâ€™s external debt distress to moderate from low due to increasing refinancing risks and narrower safety margins in East Africaâ€™s biggest economy.

The Washington-based lender estimates Kenyaâ€™s total public debt will peak at 63.2% of gross domestic product this year and gradually decline ove r the medium term. This compares with 58% in 2017 and 53.2% in 2016, when the nation ramped up infrastructure projects.

â€œThe higher level of debt, together with rising reliance on non-concessional borrowing, have raised fiscal vulnerabilities and increased interest payments on public debt to nearly one fifth of revenue, placing Kenya in the top quartile among its peers,â€ the IMF said in an e-mailed statement.

Get our news and views in your inbox

It urged Kenyaâ€™s Treasury to refinance debt using concessional loans to lengthen maturities in the coming year and limit commercial credit for projects with high social and economic returns.

While most of Kenyaâ€™s public debt is concessional, the commercial portion has increased after the nation issued Eurobonds in 2014 and February 2018, and extended the maturity of a syndicated loan to seven years earlier this year.

External creditors hold about half of the countryâ€™s public debt, and multilateral lenders account for about 40% of that.

The IMF report indicates Kenya is ready for another standby facility after allowing one to lapse in September, according to Jibran Qureishi, a regional economist for Stanbic Holdings Plc. Treasury Secretary Henry Rotich said earlier this month heâ€™d meet officials from the fund to discuss a replacement arrangement.

â€œIf they have done this for an IMF program, to get back to the IMFâ€™s good books, they should know that there are more hurdles ahead, including the possible repeal or at least a substantial modification of the rate-cap law, which will be increasingly difficult to do going forward,â€ Qureishi said by phone.

The IMF urged the central bank to allow â€œgreater exchange-rate flexibility,â€ given well-an chored inflation expectations and adequate reserves, saying this would boost the shillingâ€™s role as a potential shock absorber.

The IMF reclassified the shilling from â€œfloatingâ€ to â€œother managed arrangementâ€ to reflect the currencyâ€™s limited movement due to periodic central bank interventions. The currency, which has the fourth-best performance globally, is also overvalued by about 17.5%, it said.

The central bank reiterated its position on the shillingâ€™s value, saying the currency reflects its true and fundamental value.

â€œOur calculations support the view that there is no fundamental misalignment reflected in our exchange rate,â€ it said in an emailed response to questions.

The shilling has strengthened 1.9% against the dollar this year and was little changed at 101.23 by close of trade in the capital, Nairobi. The yield on Eurobonds due in 2024 lost 3 basis points to 7.25%, after adding 6 basis points at the close of Tuesdayâ€™s trade.

While the IMF says the shillingâ€™s trade is controlled, the currency offers the best foreign-exchange access on the Absa Financial Markets Index when compared with markets including South Africa, Botswana and Tanzania. The country beat 19 others when it came to its reserves base relative to net portfolio flows, and has a deep and liquid interbank market, according to George Asante, Absaâ€™s head of markets trading.

Wario and two of his co-accused have denied the charges and are out on bail of about R142,000 World 5 days ago

Kenyan MPs back bid to halve VAT on petrol