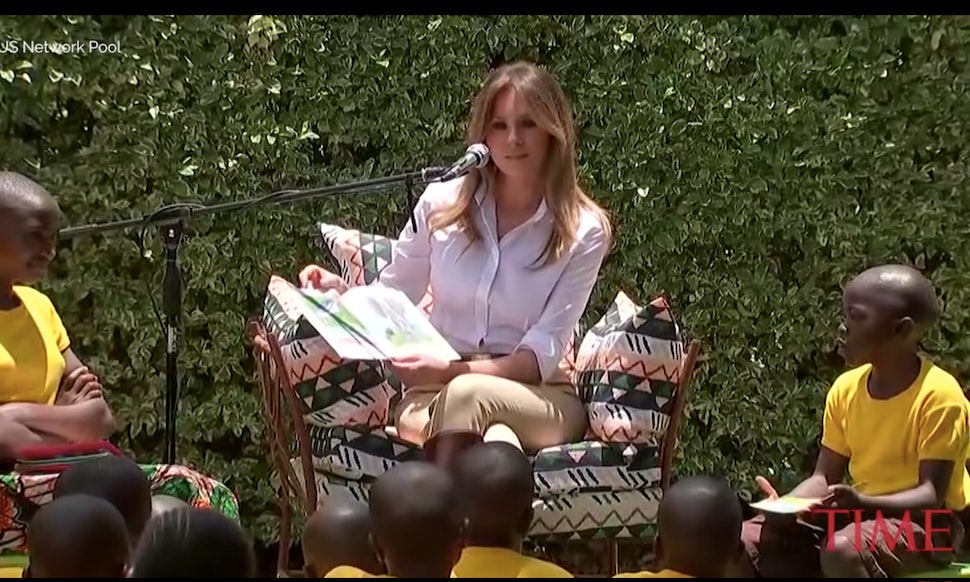 Last week, the first lady of the United States went on a solo trip through several African countries. Recently, Melania Trump tweeted a video of her in Kenya that shows her snapping photos on a safari. While offering a glimpse of the wildlife that abounds in Nairobi National Park, the video has also engendered controversy â€" particularly because of what the first lady was wearing in it.

Kenya was the second-to-last stop on the first lady's whirlwind tour of Africa, which also fe atured visits to Ghana, Malawi, and Egypt. Melania went on safari in Nairobi, Kenya's country's capital, on Friday. On Sunday, she shared a video of her Kenyan adventures on Twitter, along with the caption, "Thank you Kenya." The short clip shows her interacting with baby elephants at the David Sheldrick Wildlife Trust and then snapping photographs of a host of safari animals at Nairobi National Park.

It seems that the aspect of the video that has drawn the most attention, however, is the first lady's choice of headgear. Melania donned what is known as a "pith helmet" to go on safari â€" a type of hat made of sholapith that was typically worn by European colonial administrators and military officers when parts of Africa, including Kenya, were under colonial rule. Moreover, Europeans visiting or residing in colonial Africa during the early 1900s would also frequently wear pith helmets as sun hats, as CNN described. Thus, as The Guardian indicated, pith helmets have become associated with colonial oppression â€" and wearing one as a Westerner on a trip to Africa was perceived as quite a controversial choice.

NPR reported that, when the first lady was asked about her wardrobe choice during a press conference on in Egypt on Saturday, Melania indicated that she wished people would "... focus on what I do, not what I wear." She also stressed that she wanted to discuss what she had learned and contributed on her trip rather than her outfits, saying (via NPR):

We just completed an amazing trip â€" we went to Ghana, we went to Malawi, we went to Kenya, here we are in Egypt ... I want to talk about my trip and not what I wear. That's very important ... what I'm doing with my initiatives.

Though the first lady seemed reluctant to discuss her decision to wear a pith helmet, many members of the public are still demanding answers. CNN reported that Matt Carotenuto, the coordinator of African Studies at St. Lawrence University, compared the first lady's ensemble to "(showing) up on an Alabama cotton farm in a confederate uniform."

Others also indicated that they believed Melania's safari wardrobe reflected an antiquated and misguided perception of the continent. As Kim Yi Dionne, a professor of political science at the University of California, Riverside who specializes in African politics told the New York Times:

... When people think of Africa, they have these standard narratives ... Her attire is a signal of her understanding of what Africa is in 2018. Itâ€™s tired and itâ€™s old and itâ€™s inaccurate.

Overall, while the first lady's video of her time in Kenya certainly highlighted the beauty of the country, it also sparked controversy. It remains to be seen whether Melania will address the issue further in the future.